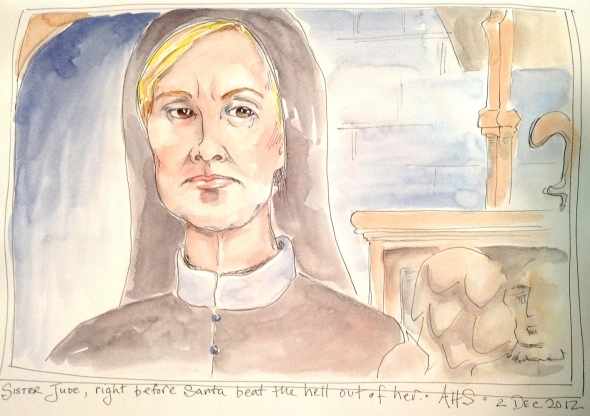 Sister Jude, to Dr. Arden (American Horror Story Asylum) as he adeptly reels her in: “I don’t have time for the prologue. Just say it.”
Noodler’s Bulletproof Black & watercolor in a 400 Series hardbound Strathmore notebook.
2 December 2012.

As attracted as I am to dark and scary TV shows, I am absolutely obsessed with this season’s American Horror Story. I’m especially drawn and repelled by the Day Room scenes where Sister Jude has ordered that the record player be in constant use, playing an annoying nonsensical song. When I was a kid, I used to play that song on my record player incessantly: the French Singing Nun’s “Dominique”. One side of the 45 rpm record had the French version and the other had the English. Hooked on this show, my need to know the answers will grow until it airs the next episode on January 2, 2013. I wait…