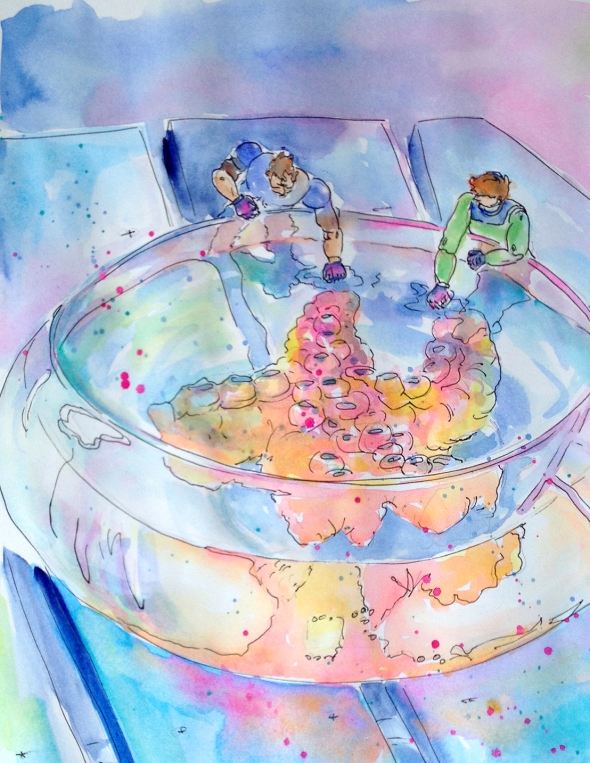 Noodler’s Bulletproof Black in a Lamy Vista EF, DS and WN watercolors in a 11×14″ Canson XL Mix Media pad. Yes, the paper buckles; it’s not the greatest for wet work. But I don’t mind if I slosh beer on it while I splash paint around…

On the last day of Spring, I dunked Stella, the amazing expanding sponge toy into a glass bowl and placed her on the front porch table where Stego was ensconced. She had been egging me on for weeks and because Stego was nearly back to his old tiny self, I obliged. Stella began to grow slowly, but when she made progress, she meant business.

Recently, I found some toys on the walking path near the house and scooped ’em up because they were winking at me. They immediately began to hang around Stella’s bowl and they clearly desired to be drawn. I’ve been keeping track of Stella for a week now and so have the boys. They’d better watch out, though. Stella’s going to get way too big for that bowl.

Graphite and DS watercolor in a 3.5 x 5.5″ watercolor Moleskine book. Windham, ME

My sister-in-law gave me a couple of expanding creatures last week and it’s been too cold to do anything but sit in my idling car with the defrost and the heated seat blasting. Warmer weather started (exactly) today and I scheduled front porch time for hanging out and sketching. I filled a huge vase with water and dropped the stegosaurus in and sketched away while sipping iced coffee.

Summer is here and not a moment too soon.

My participation in the International Fake Journal Month has consumed me. My creative sketching and painting energy is all wrapped up in my hand-bound fake journal where young Hoshi Banks, a college engineering student, has taken an internship position on the Moon. At “present” she is on a shuttle, about to orbit the Moon and descend to the Japanese Lunar surface station Kaguya. Hoshi has been sleeping quite a bit on this journey, the reasons for which she is (finally) becoming suspicious. There are three other interns in the program and Hoshi is growing desperate to tell them she thinks the aerospace corporation which has organized this expedition to Kaguya is not what it seems!  I wonder what lies in store for them on the Moon?

Have a look through the pages of my fake journal, Kaguya’s Gift, and let me know what you think! Maybe you will want to participate next year? 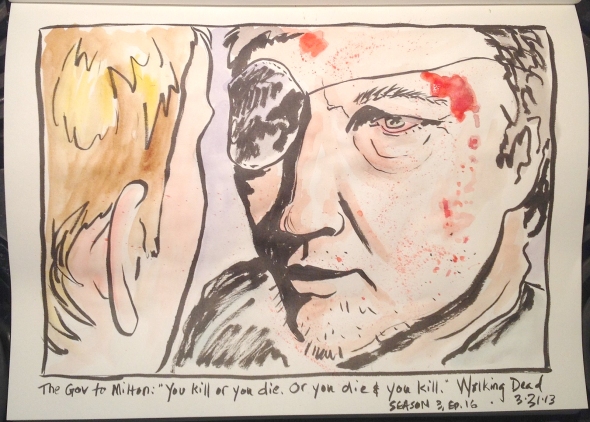 The Governor to Milton: “You kill or you die. Or you die and you kill.”
Pentel Pocket Brush Pen and watercolor on 9×12″ 400 Series Strathmore hardbound sketchbook.

Ugh, I was worried that the dream Goddess would punish me with zombie dreams if I watched the season 3 finale of The Walking Dead right before going to bed last night. The Governor is one messed up unit and without spoiling the outcome, the character no longer has a shred of pathos intact after what he did in that episode. I sketched with my new Pentel Pocket Brush Pen, with which I have obviously not developed a working relationship. Rough sketch above! Need to keep sketching with it to learn its nuances.

On the subject of dreams, watching last night’s show doesn’t explain the dream that I did have: In it, I was a feudal Japanese house servant/wife, complete with a filthy floor, a smoky kitchen, a cranky mother-in-law and an oafish, arse-scratching husband. The family did own a beautiful exotic wood desk that had two big drawers, each of which had its own key. Needless to say, I did not possess the keys to the desk and during the dream I was intensely absorbed in fantasy about the contents of those drawers.

If I could “unwatch” last night’s tv show, I would select that option. I hope the bloody mess that was The Walking Dead season closer won’t enter my dreams.

Because I’m the Leprechaun!

Wish I’d bought two of these punching Leprechaun pens at the dime store last month, because I gave this to the hostess at her St. Patrick’s Day party last Saturday. (Great party, though!) Every time I look at the face on this sketch, I think of the comedian Chris Rock. Come to think of it, he does kind of remind me of a Leprechaun, somehow.

And then my mind goes down the association tunnel and quickly lands on a certain Saturday Night Live skit involving Wayne, Garth and a flashlight.

The Eyes Have It

From last fall’s TV sketching obsession, this is CW’s Supernatural Archangel Castiel in the midst of smiting the devilish Crowley with his laser-blue eyes. Noodler’s Bulletproof Black and watercolor on 11×14″ Canson Mixed Media Pad. 14 Nov. 2012.

Last night, I just couldn’t fall asleep. Tossed, turned, counted backward from 100 several times and never once nodded off. Oh, I was tired enough to sleep. Yes, I was. And no, I didn’t consume caffeine or the like after noon yesterday. What I did was teach an early evening yoga class that ended at 7:30 p.m. Sleeplessness after teaching has happened to me before. I also get this skimming consciousness after practicing a pranayama, or breathing exercise, called Nadi Shodhana. I’ve casually queried my yogini friends and nobody else admits to this experience. Maybe this was a spontaneous Yoga Nidra experience? Naaaa. I feel refreshed and alert after Yoga Nidra, quite the opposite of how I feel at the moment.

Today I will have to endure feeling … and looking … like this sketch of poor old red-eyed, dry-lipped and sleep-deprived Castiel.

Dean pouts while Sam snarks about the medieval costume Dean must don to investigate the supernatch goings on at a LARP (live action role-playing) festival. Of course, Sam smirks to learn that his older and much prettier brother gets a taste of humility now and then, who wouldn’t? But, as they near the end of 8 seasons, I am reluctantly beginning to believe they are preparing to call it quits. Story lines have always been predictable and that’s never bothered me. But it seems like the Winchester brothers themselves have become complacent caricatures of their own characters. That doesn’t mean there won’t be a season 9; another season would give them an opportunity to indulge their dedicated followers a jump-the-shark grand finale season. (Not that they haven’t been “jumping the shark” in every episode for, oh, about 8 seasons!)

Over the top stunts and story lines or not, I’ll be watching … and sketching.