The Eyes Have It

From last fall’s TV sketching obsession, this is CW’s Supernatural Archangel Castiel in the midst of smiting the devilish Crowley with his laser-blue eyes. Noodler’s Bulletproof Black and watercolor on 11×14″ Canson Mixed Media Pad. 14 Nov. 2012.

Last night, I just couldn’t fall asleep. Tossed, turned, counted backward from 100 several times and never once nodded off. Oh, I was tired enough to sleep. Yes, I was. And no, I didn’t consume caffeine or the like after noon yesterday. What I did was teach an early evening yoga class that ended at 7:30 p.m. Sleeplessness after teaching has happened to me before. I also get this skimming consciousness after practicing a pranayama, or breathing exercise, called Nadi Shodhana. I’ve casually queried my yogini friends and nobody else admits to this experience. Maybe this was a spontaneous Yoga Nidra experience? Naaaa. I feel refreshed and alert after Yoga Nidra, quite the opposite of how I feel at the moment.

Today I will have to endure feeling … and looking … like this sketch of poor old red-eyed, dry-lipped and sleep-deprived Castiel. 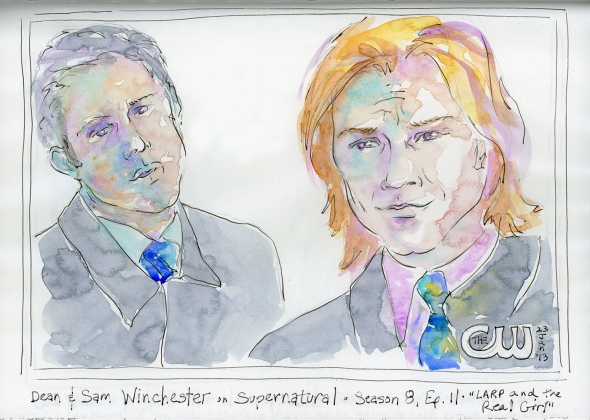 Dean pouts while Sam snarks about the medieval costume Dean must don to investigate the supernatch goings on at a LARP (live action role-playing) festival. Of course, Sam smirks to learn that his older and much prettier brother gets a taste of humility now and then, who wouldn’t? But, as they near the end of 8 seasons, I am reluctantly beginning to believe they are preparing to call it quits. Story lines have always been predictable and that’s never bothered me. But it seems like the Winchester brothers themselves have become complacent caricatures of their own characters. That doesn’t mean there won’t be a season 9; another season would give them an opportunity to indulge their dedicated followers a jump-the-shark grand finale season. (Not that they haven’t been “jumping the shark” in every episode for, oh, about 8 seasons!)

Over the top stunts and story lines or not, I’ll be watching … and sketching.

Aiming for a fast and loose sketch, I cast my eye about for inspiration. Of course, my desire for detail superseded my plan and guided my gaze to the china cabinet. There were the pretty blue and white Indies plates. Ah! The sugar bowl would be fun to sketch, I thought to myself. After I got the bowl settled in the middle of the kitchen table, I queued up a Supernatural episode on Netflix and started drawing while Sam and Dean raced about saving people and “ganking” demons.

Mostly, I listen to music when I sketch. I don’t know what impulse led me to put on my guilty pleasure, Supernatural, while drawing, but it’s not lost on me that I was depicting something very fragile and light against a heavy background of tongue-in-cheek television horror. Think I won this battle, though. I’m quite happy with the resulting delicate sketch of our pretty sugar bowl. Maybe that old saying is true: opposites attract.