“If you can’t say something nice … 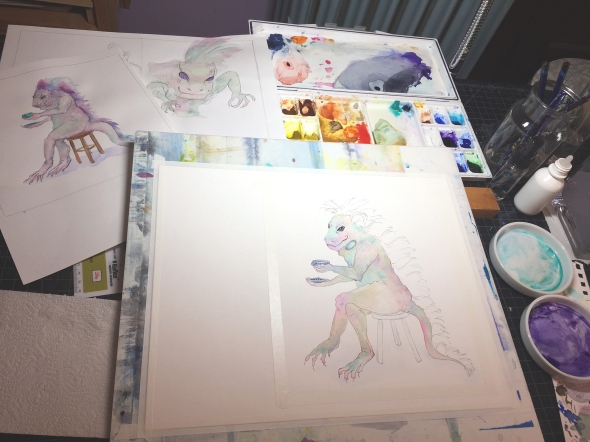 … come sit next to me.” Said by Olympia Dukakis’ character in the film, Steel Magnolias. Somewhat weary of scrutinizing and drawing the faces I see on tv/internet regarding current events, I turn to spinning the backstory of completely fictitious characters. This guy’s supposed to be an iguana. He likes Ceylon black tea but he’s very sensitive to caffeine so he must limit his consumption. Unfortunately, moderation is not in his rather hefty toolbox, so he’s wired at the moment.

Five years since my last post. That’s quite a gap. But just because I haven’t posted for such a long time doesn’t mean I haven’t been sketching (or obsessing over art supplies.) My present plan is to pick up where I left off without attempting to fill in the spaces — in those gap years, I’ve posted five International Fake Journal Month collections along with tons of sketches on my Flickr site to which there is a link in the sidebar. Over the winter I had my first book gig and my illustrations for a children’s book are in the can, as they say. When that is published I will be able to write about it and another book project I’m working on.

Fringe is over. American Horror Story Asylum is done. Aside from the Winchester Bros., there’s no tv show I’m watching currently that is snagging my sketching eye. Although I am keeping up with The Walking Dead, I don’t exactly feel like focusing on zombie eyeballs and nasty ooze closely enough to render it on paper. Not so much. Mostly, I’m moping around because it’s the middle of winter, my hands feel like scratchy sandpaper and I’m feeling fussy.

Although the drawings I’ve made over the past couple of weeks have been okay, but I seem to be in an imagination dry spell. Nothing’s really satisfying me. I’ll go so far as to settle on a subject, select a sketchbook to make an entry in, open the book and uncap my lovely Lamy Joy 1.1mm filled with Noodler’s Lexy Grey … and then I hesitate. Nope. My attention span just isn’t strong enough to dedicate sufficient energy to fill a sketchbook page. I made a ho-hum attempt on Super Bowl Sunday, scratching in and dropping color onto a snack table sketch earlier in February. But, blah, maybe it was the sound of football: that sketch will not be given air time. If I didn’t kind of like the sketch on the other side of that page, I’d excise it from the book and recycle it.

Last month, just as my restless feelings were taking root, these pretty tea cups that my mom let me have caught my eye and fairly demanded a sketch. I remember these cups from when I was a child (but not allowed to touch!) and they make me smile just looking at them. I thought sketching them would break the spell, but after I splashed the images onto the page, I slapped the book shut and didn’t do anything else in it until I made myself draw my desk and everything on it just as it was, without arranging things so they’d be more compelling. Sigh. I even Googled “writer’s block” and came up with an EFT video to clear stuck energy. Maybe I should give that a go.

I trust that inspiration is building, just as I am noticing that the winter is waning. I’ll spend my time on the numerous other projects I’ve been neglecting and allow my sketchy muse her space.